Today I was happy to see Dan in a little cheerier mood than yesterday. He sent me a text first thing this morning with the encouraging news that his labs were slightly better. When I visited him at midday, the nurse from the transplant center was explaining How Things Would Be once Dan gets out of the hospital. When to call the doctor (a fever of over 100, for example), when we don’t need to call, when to have his labs done, how they will remove the staples (actually, it *is* kind of like a staple remover tool, but way less ouchy than using the one in your office desk). He’ll need a couple of kidney biopsies later on down the road so the docs can look for signs of rejection – this was not very good news for Dan, seeing as how the first biopsy he had was so painful. Apparently these will be less painful because they won’t need to go through all of the back muscles like the old kidneys, but then again they might just be saying that. I guess we’ll find out! He also met with the pharmacist, who provided a list of medications that Dan will be taking for the foreseeable future. It’s actually a shorter list than the medications he was taking pre-transplant, which was nice to see. 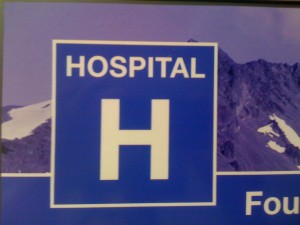 Dan’s blood pressure is better today — really good news for the kidney as it needs that good blood flow to get into full gear. He also had a nuclear imaging test (very claustrophobic, lying still for 30 minutes) so they could get a clear look at that blood supply.

Some other stuff that made Dan’s day: he was able to finally take a shower, and they unhooked all of the remaining wires and tubes, so he is free to roam about the floor without his trusty wheeled IV cart. Yay! He still has a central line, although it’s not hooked up to anything. They will use it for blood draws, and if he needs any more IV medication.

Dan has managed to avoid dialysis again today — also good news. He says that he can tell he’s improving by 1) the way he feels, and 2) the food keeps getting better. He was able to eat potatoes, a banana, and orange juice — all food/drink from the forbidden list pre-transplant.

He does now have a sweet little netbook to surf the net, but the hospital’s network speeds are not all that great. Still, I pointed him to Pandora (radio) and Hulu (TV) as places he can check out when he is bored (notice I didn’t say “if”). I’m hoping he’ll show up here and post a few entries of his own. Hi Dan!